by Andy Smith
in News
0

A major relief operation was underway on Monday and international aid began pouring in as Pakistan struggled to cope with monsoon floods that have affected more than 33 million people.

Officials said 1,061 people had died since June when monsoon rains began, but the final toll could be higher as hundreds of villages north of the mountains were cut off by fast-flowing rivers that washed away roads and bridges.

The annual monsoon is essential to irrigate crops and fill lakes and dams across the Indian subcontinent, but it can also be devastating.This year’s floods have affected more than 33 million people – one in seven Pakistanis – with nearly a million homes destroyed or badly damaged, officials said. Climate Change Minister Sherry Rehman called it the monster monsoon of the decade.

This year’s floods are comparable to 2010 – the worst on record – when more than 2,000 people died and almost a fifth of the country was under water.

Near Sukkur, a city in southern Sindh province and home to an old colonial-era barrage on the Indus River that is needed to prevent further erosion, a farmer lamented the damage to his rice crops.

Millions of acres of fertile farmland have been inundated by incessant rains in recent weeks, but the Indus is now at risk of bursting its banks as a result of water from rivers flowing north. “Our crop is spread over 5,000 acres on which the best quality rice is grown and you and we are eating,” Khalil Ahmad, 70, told AFP.

Contents hide
1 It’s all over
2 ‘Everything is destroyed’: Pakistan flood victims plead for aid
2.1 The whole village has been destroyed.
2.2 We are in great pain
2.3 Desperate for help
3 Floods in Pakistan: South Asia’s monsoon explained
3.1 What is the South Asian Monsoon?
3.2 Why is it important?
3.3 Is it the same every year?
3.4 What is the explanation for the change?
3.5 What about climate change?
3.6 Do other studies bear this out?
3.7 What does this mean for people?

Much of Sindh is now a waterlogged landscape, which is hampering large-scale relief operations led by the army.

“There are no landing strips or approaches… our pilots find it difficult to land,” a senior official told AFP.

Army helicopters were also struggling to airlift people to safety in the north, where mountains and valleys create treacherous flying conditions.

Several rivers in the area – a scenic tourist spot – have burst their banks, collapsing several buildings, including a 150-room hotel that collapsed in a strong storm.

The government has declared a state of emergency and appealed for international help On Sunday, the first aid flights started arriving – from Turkey and the UAE. The floods could not have come at a worse time for Pakistan, where the economy is in free fall.

‘Everything is destroyed’: Pakistan flood victims plead for aid

Houses began to collapse in Panjal Sheik, one by one, as torrential rains wreaked havoc on a small village in southern Pakistan and flooded large swaths of surrounding farmland.

After nearly two weeks of incessant rain this month, 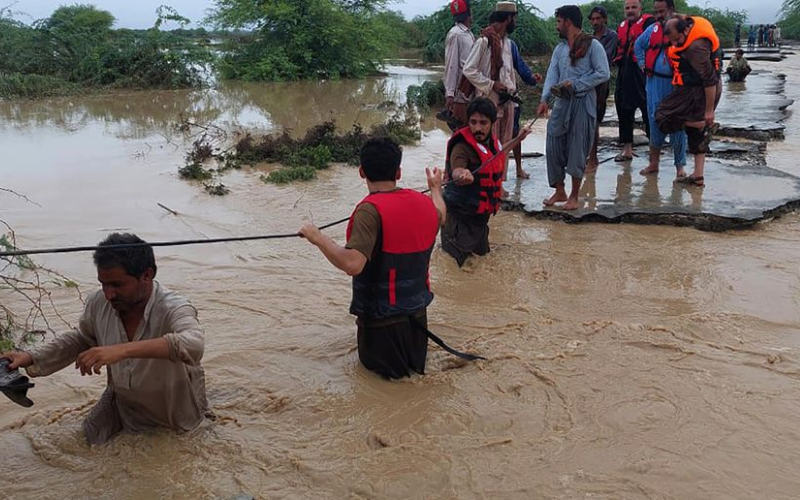 nothing was left but damaged walls, rubble and piles of people’s belongings, rising from pools of brown floodwater and gray mud.

Residents of Panjal Sheik are among the tens of millions affected across Pakistan by the worst monsoon floods in a decade, which have damaged or destroyed nearly a million homes and displaced more than 1,000 people since the rains began in June. have been killed.

Mukhtar Ahmed, a resident of Panjal Sheik, said that when the rains started, destruction was seen everywhere. “As we tried and saved the children in a house that had just collapsed, another house collapsed, and then another,” he told AFP on Sunday.

The whole village has been destroyed.

Pakistan receives heavy – often destructive – rainfall during its annual monsoon season, which is crucial for agriculture and water supply. But the devastation of this year’s rains and floods has not been seen in decades.

Pakistani officials blame climate change, which is increasing the frequency and severity of extreme weather worldwide.

We are in great pain

The brutality of the disaster was shocking, said Ghulam Rasool. The 80-year-old village head of Panjal Sheik, which is less than 25 kilometers from the banks of the Indus River.

“Suddenly there was a loud noise, and we couldn’t understand what had happened,” he told AFP.

He suspected that his son’s small house on the family land had collapsed.

“We thought all four were dead,” Rasool said, referring to his son, daughter and their two children.

As the family tried and failed to stop the floodwaters from rising on their land, the Prophet’s pregnant daughter fell into the womb. “I felt pain but I was afraid to tell anyone,” said 30-year-old Naheed Sheik. “I finally told my mother.”

Driving through the rain, her family managed to get her to an unknown hospital where her daughter was delivered by cesarean section. Her ordeal continued when she came home.

“I was half asleep in my room… when we realized the room might collapse,” he told AFP.

“I went out with my daughter in my arms and as soon as we got out, the walls fell down.

The rooms that Prophet Karim had built for his other sons and daughters also collapsed one after the other.

At the end of 13 days of rain, he surveyed what was left, sifting through piles of cattle, personal belongings, and firewood to make ends meet.

He said that he had pushed the weak walls that were left so that they would not fall on any passerby.

“Everything is destroyed. We cannot even eat bread for ourselves,” said Rasool. “We are in great pain and waiting for someone to help.”

Many flood survivors from villages like Panjal Shaikh have turned to Sukkur, the largest city nearby, hoping for help.Some sat on the elevated highway under tents made of plastic sheets.

As two army trucks passed by carrying food, sacks of wheat, tents and bags, a crowd of people rushed towards them.

Some desperately tried to climb onto the trucks, trying to wrestle each other and trying to reach the aid supplies. The soldiers shouted and lined them up, but few listened. 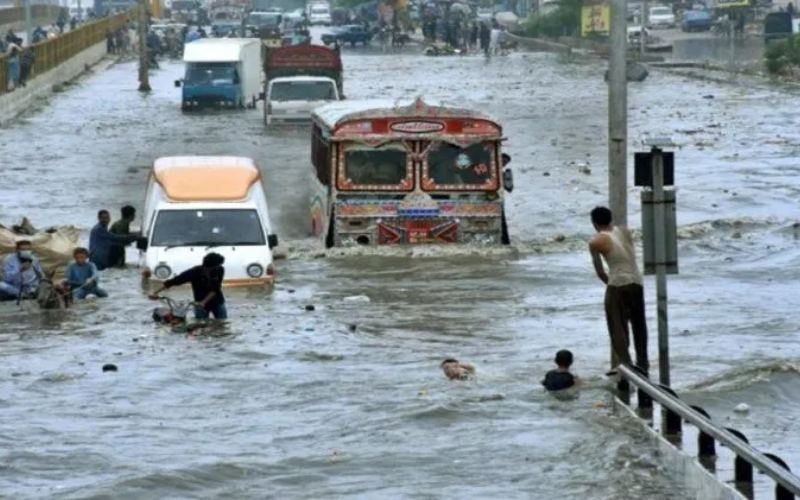 Floods have killed more than 1,000 people in Pakistan. After what its climate change minister described as an unbroken record monsoon rains with “eight weeks of non-stop storms”.

AFP explains what the monsoon is, why it’s so important and yet so dangerous, and how climate change and other human-made impacts are altering the vast life-giving but destructive annual weather system.

What is the South Asian Monsoon?

The Southwest or Asian Summer Monsoon is basically a strong sea breeze that brings 70-80% of its annual rainfall to South Asia between June and September every year.

This occurs when summer heat warms the subcontinent’s land mass, causing air to rise and suck in cold Indian Ocean air, which then produces large amounts of rainfall.

Why is it important?

The monsoon is critical to agriculture and therefore to the livelihoods of millions of farmers and to the food security of two billion people in the impoverished region.

But it brings destruction in landslides and floods every year. Melting glaciers increase the amount of water while irregular construction in floodplains increases losses.

Is it the same every year?

Despite much study, monsoons are relatively poorly understood. Exactly where and when rain will fall is difficult to predict and often varies.

This year, for example, while Pakistan has seen a deluge. Eastern and northeastern India reportedly had the lowest July rainfall in 122 years.

What is the explanation for the change?

The fluctuations are caused by changes in global atmospheric and ocean conditions. Such as the El Niño effect in the Pacific and a phenomenon known. As the Equatorial Indian Ocean Oscillation (EQUINOO) that was only discovered in 2002.

Other factors include local effects such as aerosols. Dust clouds rising from the Sahara desert, air pollution and even irrigation by farmers.

What about climate change?

India is warming and has seen more cyclones in recent years. But scientists are unclear how a warming planet is affecting the highly complex monsoon.

A study by the Potsdam Institute for Climate Impact Research (PIK) last year. Tracking changes in the monsoon since the mid-20th century found that it is getting stronger and worse.

Initially, aerosol pollution reduced rainfall by reflecting sunlight, but from the 1980s. The warming effects of greenhouse gasses began to drive stronger and more unstable rainy seasons, the study said.

Do other studies bear this out?

It said there was an “emerging consensus. That it was the decline in aerosol pollution that offset the expected increase in rainfall from global warming.

With continued warming and lower aerosol emissions. He predicted more rain and greater variability by the end of the century, with “substantial increases” in daily precipitation ranges.

What does this mean for people?

India’s 2021 monsoon was a case in point: June rains were above normal, July rained it down. August was almost dry and September rains returned with a vengeance.

Several hundred died in floods in Maharashtra in July and in Gujarat in September. In the same month, a cloudburst turned the streets of Hyderabad into flowing rivers within two hours.

But by October, farmers in parts of north and north-east India were suffering from drought. While elsewhere the monsoon took longer than usual to return.

How to Draw a Side Profile

Five Crime Drama’s You Must Binge-Watch

How Do I Find My Local Bookkeepers Sunshine Coast